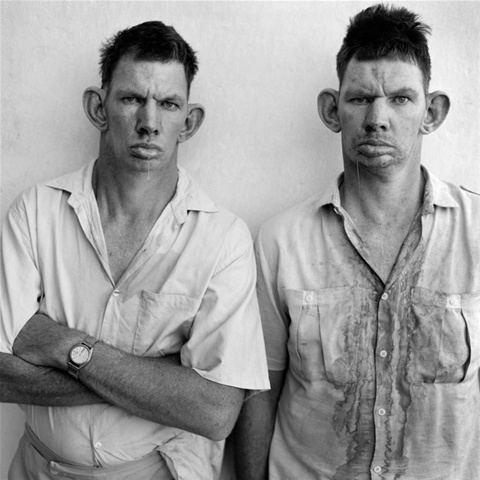 A distillation of American school of the grotesque, the fascination with those on the periphery of life from a divine lineage: Lisette Model, Diane Arbus and Arthur Tress to Europe with August Sander, Brassai Boris Mikhailov (Russia) et al the list goes on every country has such an anthropologist with a camera and some with a spark of genius which allows their work to transcend into a poetic interpretation of a moment. Ballen's work is also political in the most honest of ways presenting the viewer with undeniable truths as defined within the confines of each neibourhood . Platteland published in 1994 is a study of the dispossessed descendants of the dutch boer community which resided in the vast expanse of the South African Transvaal, descendants of "The Great Treck".
Roger Ballen's work is unrelentingly intoxicating, it's brutal aestheticism a sensory delight and at the same point levers one into a self challenging moral dilemma.

On and on the chain of imagery, now collaborating with"Die Antwoord" the South African counter culture Zef "Rap-Rave" group.

Our Tracy is amazing.

With not long left...poor old Bourgeois must have been past senile to have welcomed these tawdry narcissistic cack handed scrawls onto her work. BOOOOO!!! :)